Have We Been Deceived into Worshipping “Another Jesus”?

The following verses were in my Bible reading this morning – I did not pick this section, it was simply in my daily reading in eSword:

And Israel abode in Shittim, and the people began to commit whoredom with the daughters of Moab. And they called the people unto the sacrifices of their gods: and the people did eat, and bowed down to their gods. And Israel joined himself unto Baalpeor: and the anger of the LORD was kindled against Israel. And the LORD said unto Moses, Take all the heads of the people, and hang them up before the LORD against the sun, that the fierce anger of the LORD may be turned away from Israel. And Moses said unto the judges of Israel, Slay ye every one his men that were joined unto Baalpeor. And, behold, one of the children of Israel came and brought unto his brethren a Midianitish woman in the sight of Moses, and in the sight of all the congregation of the children of Israel, who were weeping before the door of the tabernacle of the congregation. And when Phinehas, the son of Eleazar, the son of Aaron the priest, saw it, he rose up from among the congregation, and took a javelin in his hand; And he went after the man of Israel into the tent, and thrust both of them through, the man of Israel, and the woman through her belly. So the plague was stayed from the children of Israel. And those that died in the plague were twenty and four thousand. And the LORD spake unto Moses, saying, Phinehas, the son of Eleazar, the son of Aaron the priest, hath turned my wrath away from the children of Israel, while he was zealous for my sake among them, that I consumed not the children of Israel in my jealousy.  (Num 25:1-11)

We serve a jealous God!  Paul wrote of his concern about Christians being deceived into worshipping “another Jesus”:

But I fear, lest by any means, as the serpent beguiled Eve through his subtilty, so your minds should be corrupted from the simplicity that is in Christ. For if he that cometh preacheth another Jesus, whom we have not preached, or if ye receive another spirit, which ye have not received, or another gospel, which ye have not accepted, ye might well bear with him.  (2Co 11:3-4)

Who is “Easter“, anyway?  Find out for yourself – 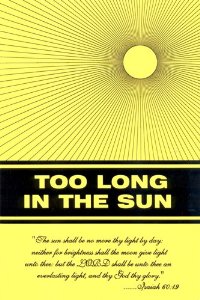 Too Long in the Sun