Why I Don’t Go to Church in December

Hear ye the word which the LORD speaketh unto you, O house of Israel: Thus saith the LORD, Learn not the way of the heathen… For the customs of the people are vain: for one cutteth a tree out of the forest, the work of the hands of the workman, with the axe. They deck it with silver and with gold; they fasten it with nails and with hammers, that it move not. They are upright as the palm tree, but speak not: they must needs be borne, because they cannot go….there is none like unto thee, O LORD; thou art great, and thy name is great in might. (taken from Jer 10:1-6 KJV)

Observe and hear all these words which I command thee, that it may go well with thee, and with thy children after thee for ever, when thou doest that which is good and right in the sight of the LORD thy God. When the LORD thy God shall cut off the nations from before thee, whither thou goest to possess them, and thou succeedest them, and dwellest in their land; Take heed to thyself that thou be not snared by following them, after that they be destroyed from before thee; and that thou enquire not after their gods, saying, How did these nations serve their gods? even so will I do likewise. Thou shalt not do so unto the LORD thy God: for every abomination to the LORD, which he hateth, have they done unto their gods; for even their sons and their daughters they have burnt in the fire to their gods. What thing soever I command you, observe to do it: thou shalt not add thereto, nor diminish from it.
(Deu 12:28-32 KJV)

And the rest of the men which were not killed by these plagues yet repented not of the works of their hands, that they should not worship devils, and idols of gold, and silver, and brass, and stone, and of wood: which neither can see, nor hear, nor walk: (Rev 9:20 KJV)

And the LORD spake unto Moses, saying, Speak unto the children of Israel, and say unto them, Concerning the feasts of the LORD, which ye shall proclaim to be holy convocations, even these are MY FEASTS.
(Lev 23:1-2 KJV)

So, why should we celebrate pagan holidays to the LORD, when He gave us HIS HOLY-DAYS – holidays???  Personally, I just have a real problem going in to praise and worship the ONE TRUE GOD when that green idol is on the front stage…

How It All Got Started

Long before the advent of Christianity, plants and trees that remained green all year had a special meaning for people in the winter. Just as people today decorate their homes during the festive season with pine, spruce, and fir trees, ancient peoples hung evergreen boughs over their doors and windows. In many countries it was believed that evergreens would keep away witches, ghosts, evil spirits, and illness.

Did you know? Christmas trees are grown in all 50 states including Hawaii and Alaska.

In the Northern hemisphere, the shortest day and longest night of the year falls on December 21 or December 22 and is called the winter solstice. Many ancient people believed that the sun was a god and that winter came every year because the sun god had become sick and weak. They celebrated the solstice because it meant that at last the sun god would begin to get well. Evergreen boughs reminded them of all the green plants that would grow again when the sun god was strong and summer would return.

The ancient Egyptians worshipped a god called Ra, who had the head of a hawk and wore the sun as a blazing disk in his crown. At the solstice, when Ra began to recover from the illness, the Egyptians filled their homes with green palm rushes which symbolized for them the triumph of life over death. 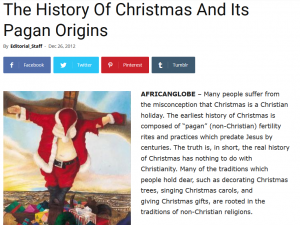 There is loads of information on the internet about the pagan history of the tree and Christmas… do your own research and see what you come up with!
Blessings to all as sweet Holy Spirit leads us into all truth!
Bookmark the permalink.